The past week we have been camped out at the Hood River County Fairgrounds with  the owners of 18 other Bluebird Wanderlodges. I have to admit, at first, I was skeptical. I thought, worst case scenario, I would just stay in the coach and read a book. Shahin really wanted to come, but I thought it would be super boring. I was wrong. We had a total blast, hanging out with great people, learning lots about out rig, and having lots of fun.

We arrived on Monday, the day before the Rally officially started. We got set up next to another bus, and then Shahin took our car into town to get the baseplate and wiring harness installed so we can tow it. After he got back someone came over and said that they were going into town to a taqueria for dinner. We decided to join in and had some delicious enchiladas, carnitas, and chile rellenos. After dinner we went back to camp and Shahin busted out his father’s day gift, a propane fire pit. It was a big hit and a bunch of people were hanging out with us the first night. 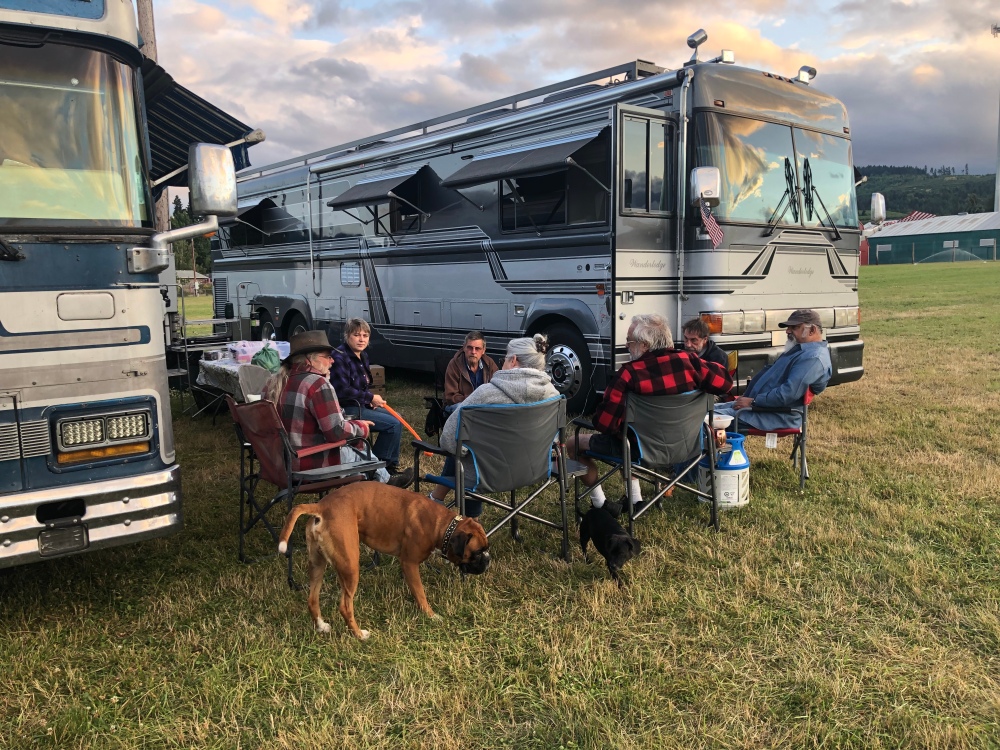 Tuesday was the official first day of the Rally and the Birds were rolling in all day! Our “next door” neighbors, Kevin and Arla, and we decided to cook a big breakfast together-eggs, bacon, and waffles. One of the guys we met was Lucas. He had spent his career doing the electrics for yachts, flying all over the world wherever the yacht owners needed him. He noticed the old Dish network satelite on our roof and asked if it worked well. Shahin told him about his plans to replace it with an antena that would give us good internet reception, since that was way more important to us than TV. Lucas said if he could have the Dish, he would take it down and install our new antena for us. What a deal! Now all Shahin had to do was order a new antena, right? We had an appetizer potluck at 5pm that pretty much served as dinner since there was so much to eat. We got to meet some more people and a bunch came to hang out around our firepit again that night.

The next day was mostly hanging around talking with people about their buses and their travels and just getting to know people. We had a delicious BBQ dinner catered by one of the group, and afterward we played LCR. I had never heard or played it before, but was an easy fun game, and a nice way to hang out and get to know people some more.

Thursday was July 4th and there was a parade in Hood River, but we were lazy and didn’t go. We decided to wait until the Odell parade instead. A couple of the buses from the group were in the parade and we all rode along waving and throwing candy out the windows for the kids. It was a lot of fun. Just some real small town Americana. We couldn’t see fireworks from the fairgrounds that night, but we could hear alot! 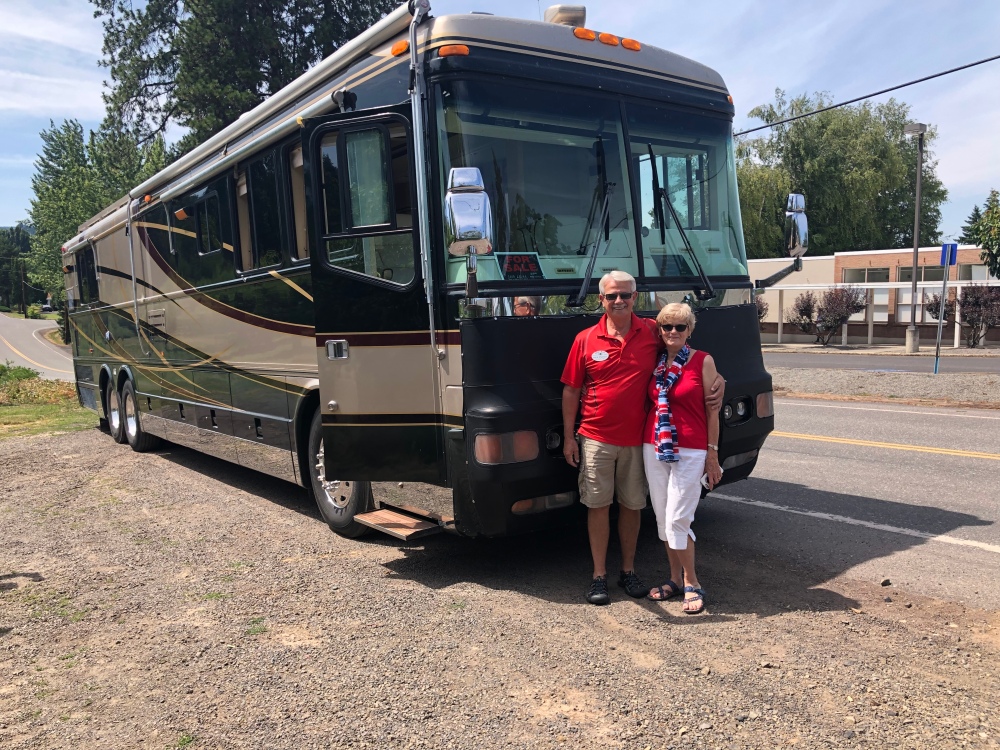 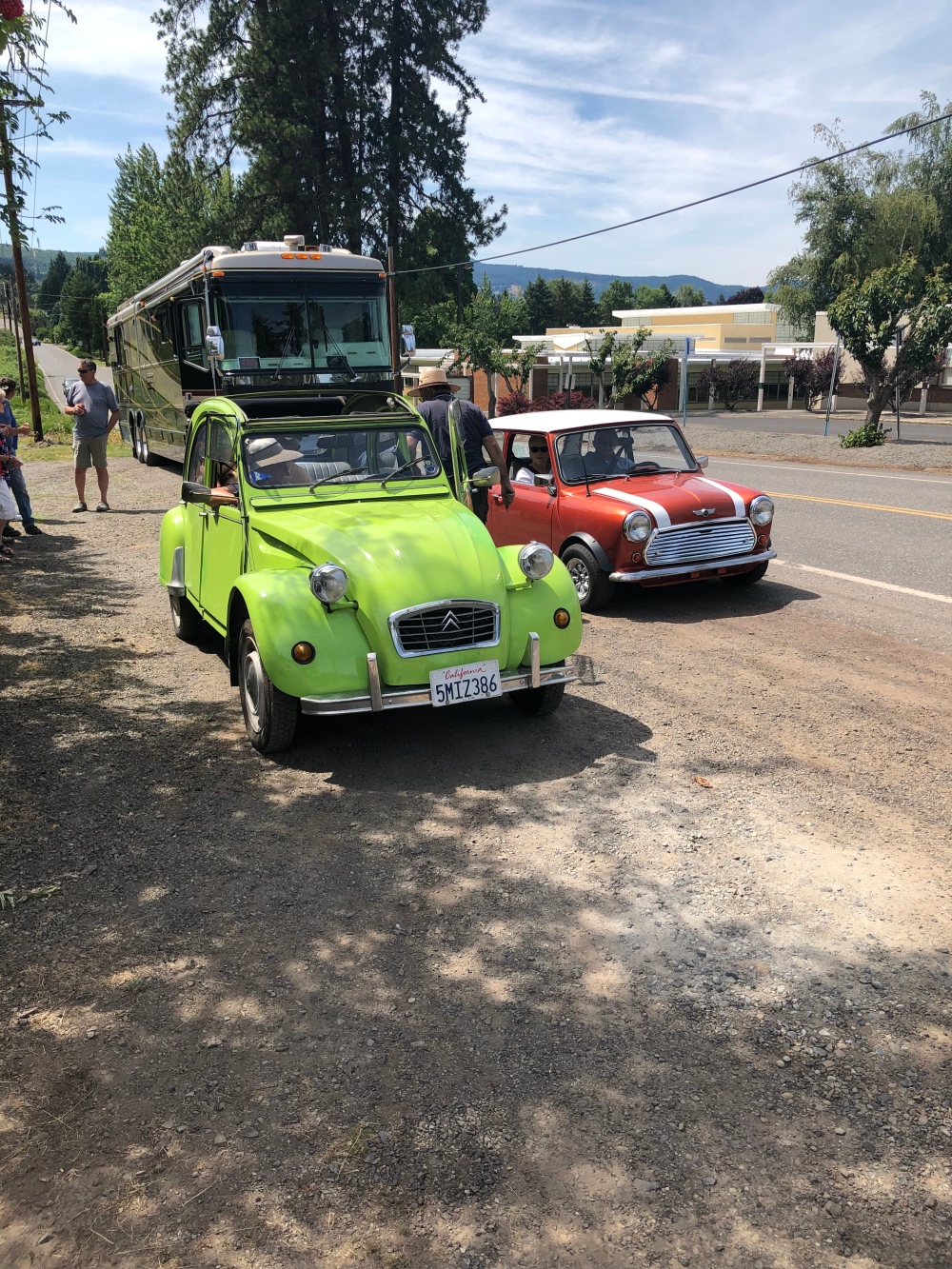 Friday there was a “Wanderlodge Rodeo”. John, the husband of the couple who planned the Rally, had set up a simple driving course in a nearby field with orange pylons. It consisted of a right hand turn into an S-curve then backing into a space before pulling out and finishing the course. You could drive it straight, or for an extra challenge, drive it in reverse, or drive it with a bucket on your head and your spouse giving you directions. I thought it was a good opportunity for me to try driving the coach. Everyone said I did ok for the first time, but when I finished I told Shahin that I wanted to do it again, so he said instead of going straight up the road, I should pull out and around so I was heading straight into the course for the second try. Little did we realize that the grass on the other side was completely waterlogged and I immediately sunk in and got the bus stuck in the mud! Oh well, so much for a second try. Fortunately, the fairgrounds had a big tractor to pull us out. At dinner that night, John gave out awards and I got an honorable mention for Wanderlodge Mudbogging.

My neighbor and now friend, Arla won the Buckethead Challenge! Bad ASS! After dinner, one of the families hosted BINGO! Their son was the caller and he did a really fine job! 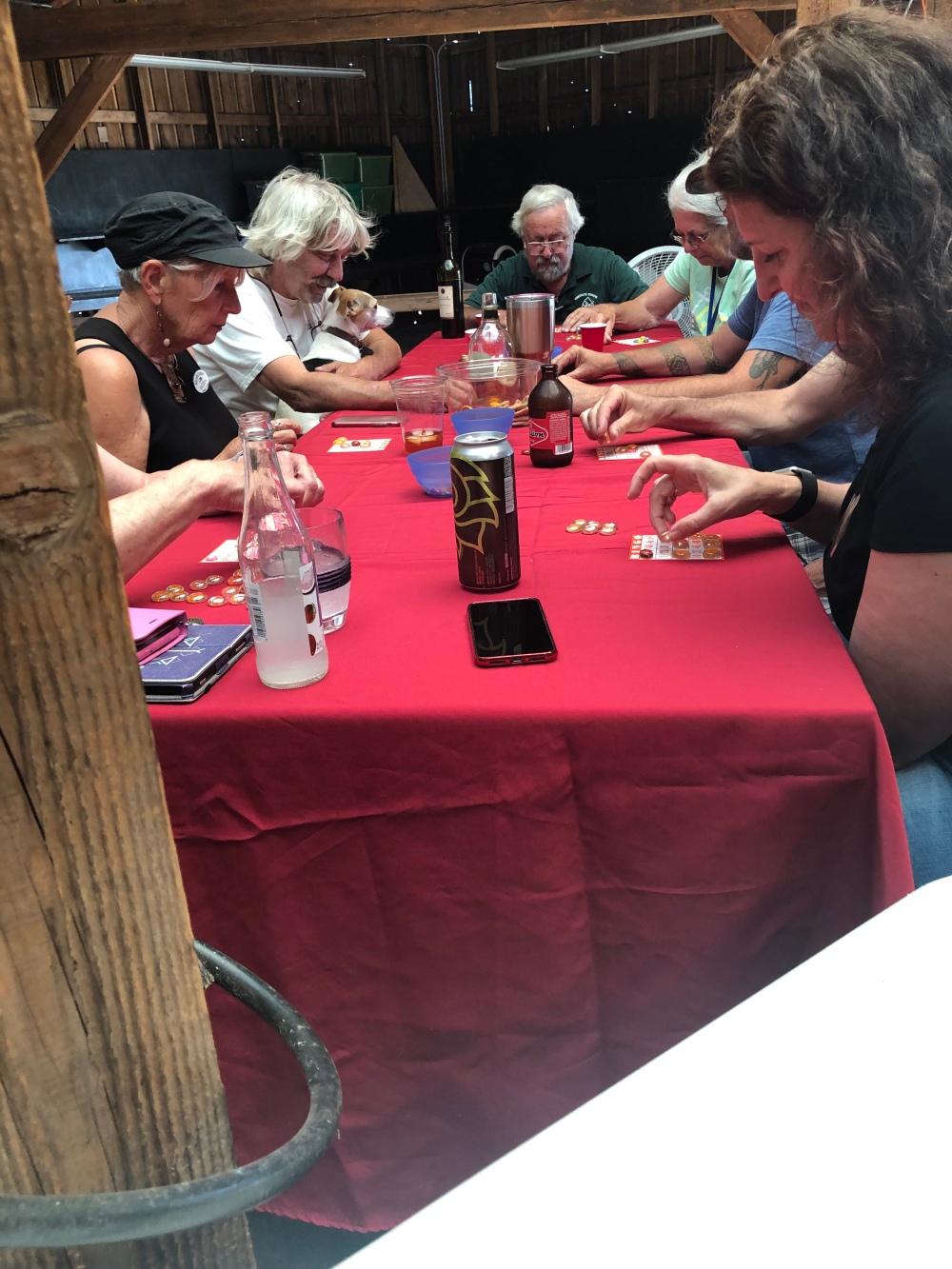 Saturday the Ladies had a day out. Kathie, the wife of the couple that organized the Rally, took us out wine and cider tasting and to the Hood River Lavender Festival. It was a really fun day to hang out with just the ladies.

We had delicious cider at The Gorge White House. The Honey Lavender Cider was just amazing, but they didn’t have enough to sell except to drink in the tasting room, so I bought a growler each of the Blueberry Cider and the Lemon Pear. They also had beautiful flower and berry fields where you could pick your own. 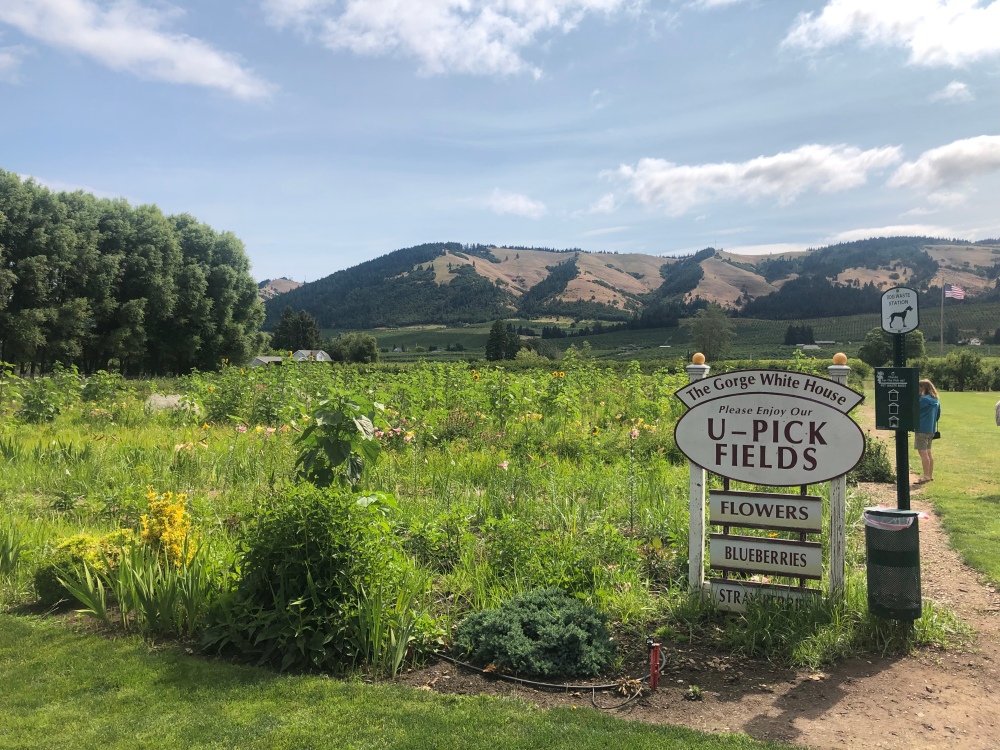 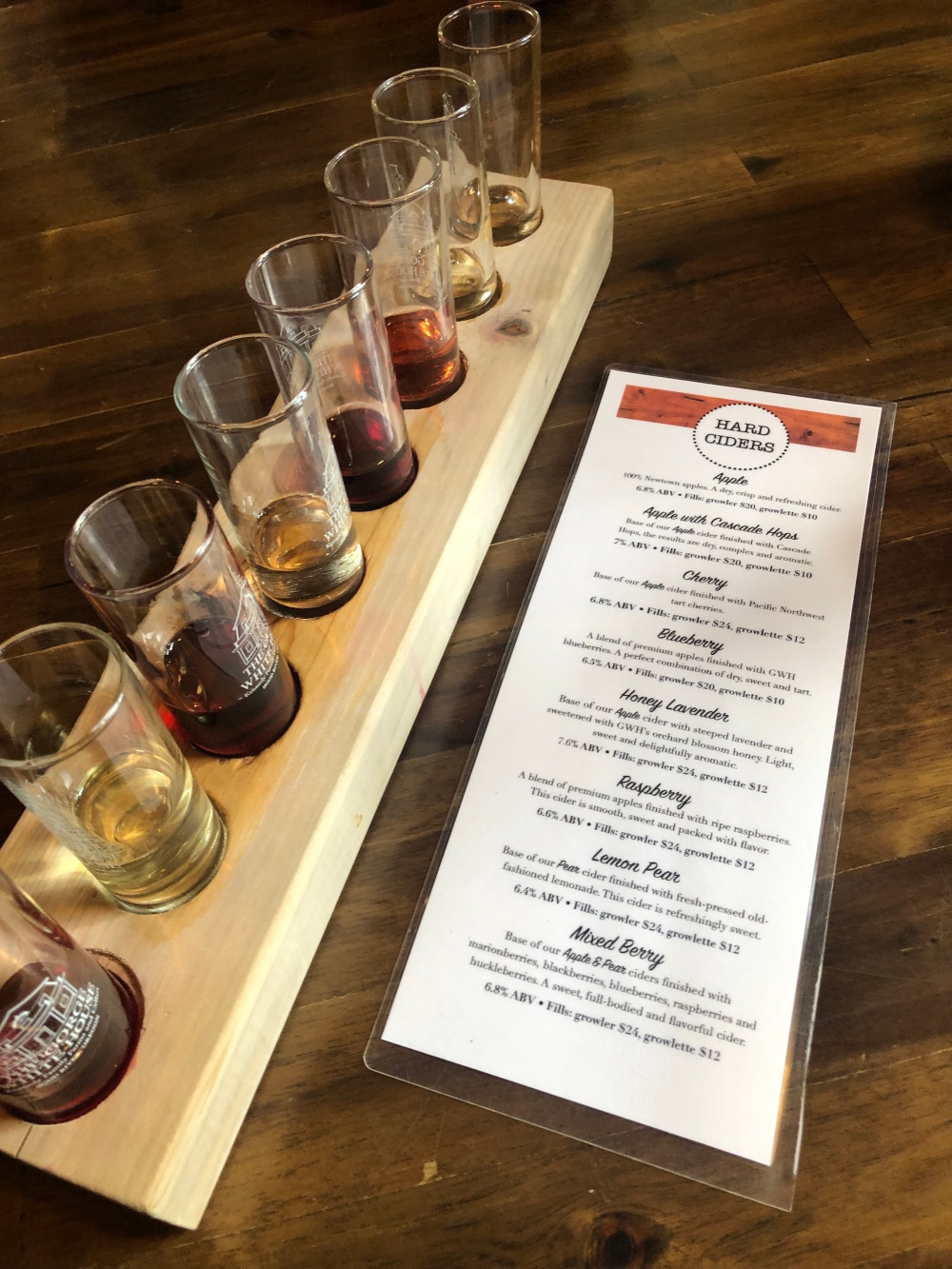 Next we stopped at Packer Orchard and Bakery for cookies, fruit and jam. The cookies there were so good! I bought eight cookies, two turnovers, and three jars of jam. 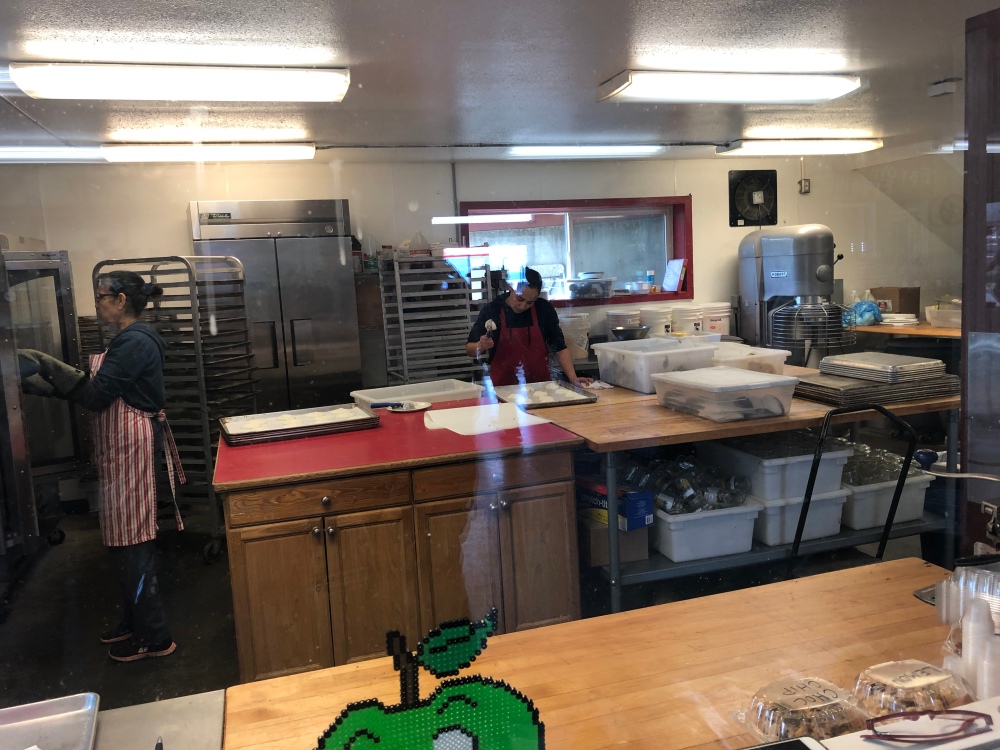 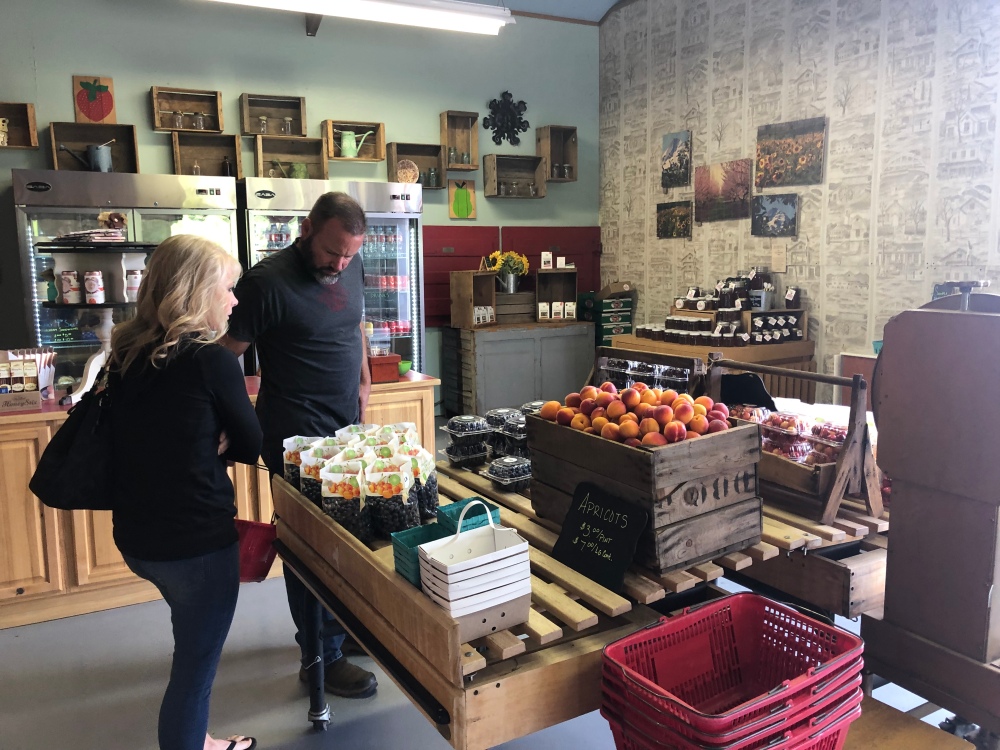 Our next stop was the Grateful Vineyard for more wine tasting and lunch. Beautiful views of Mount Hood! Linda (Lucas’s wife) and I shared a pizza with Gorgonzola, pears, and bacon. YUMMM! The wines there were really good too. 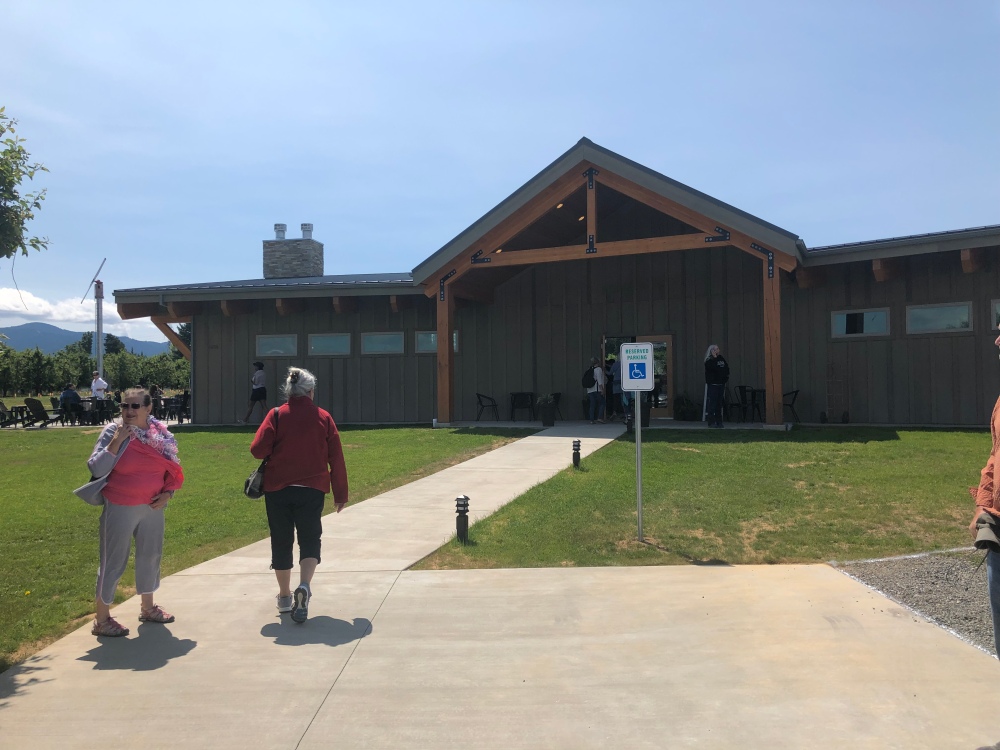 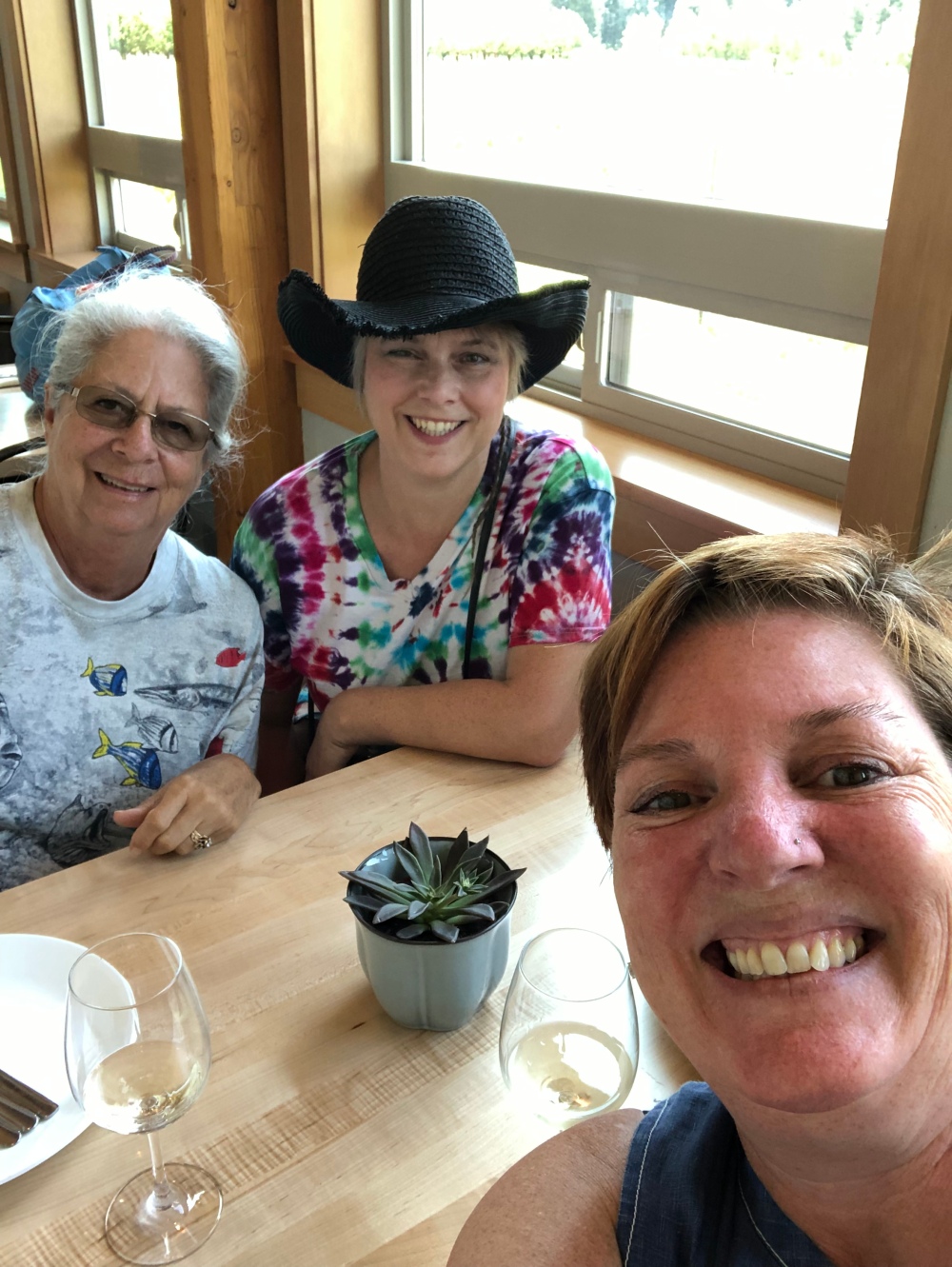 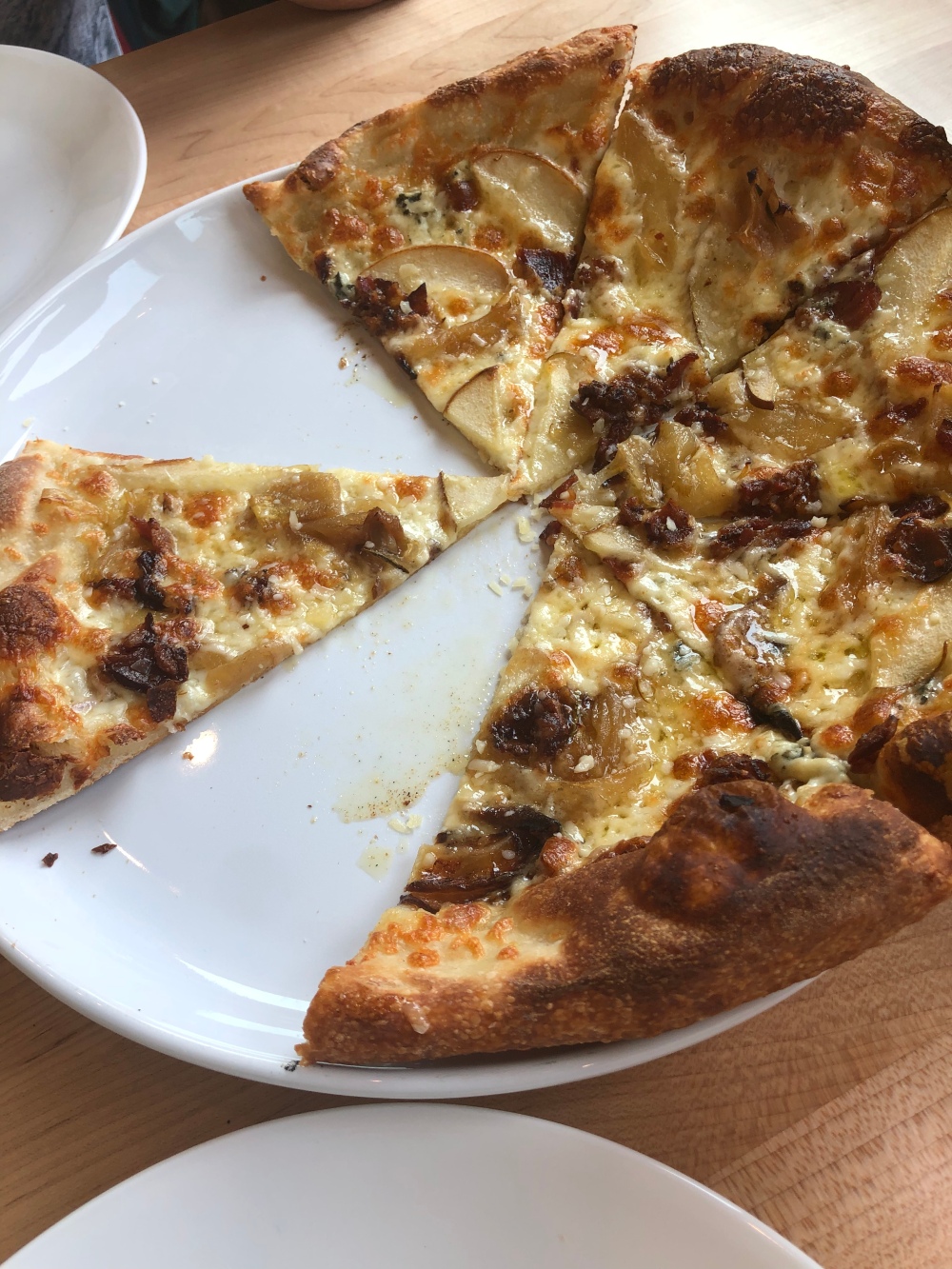 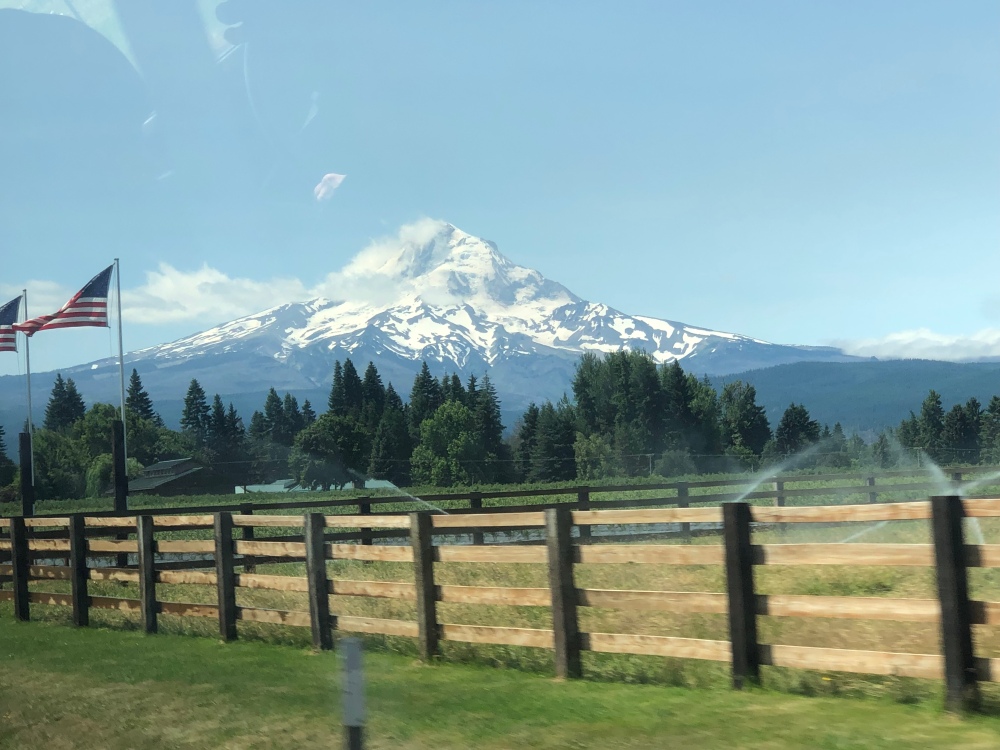 Finally, we went to Hood River Lavender, where they were having a little festival with live music and vendors. We picked handfuls of lavender and wild flowers before heading back to our camp. The lavender made our coach smell heavenly! 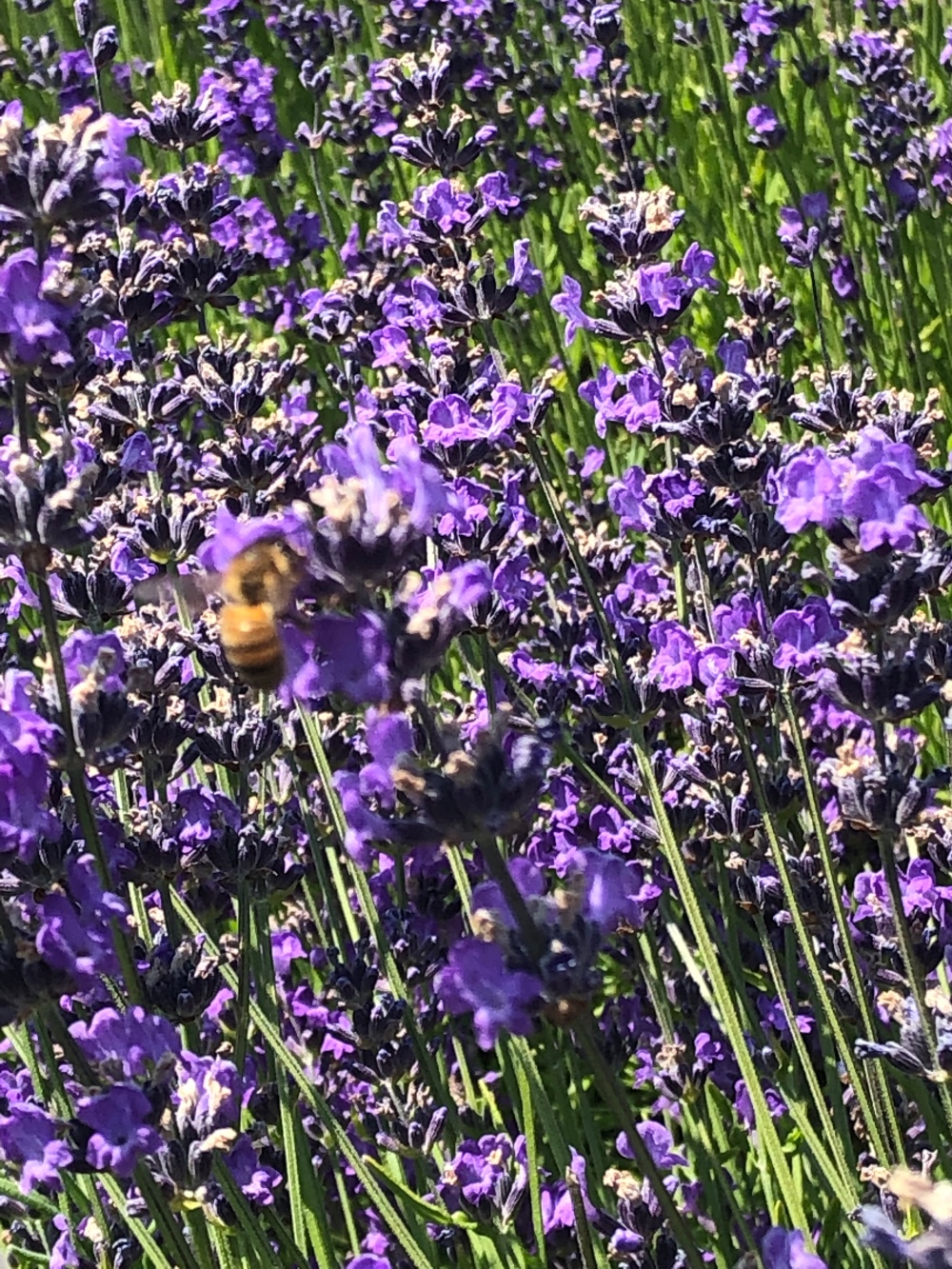 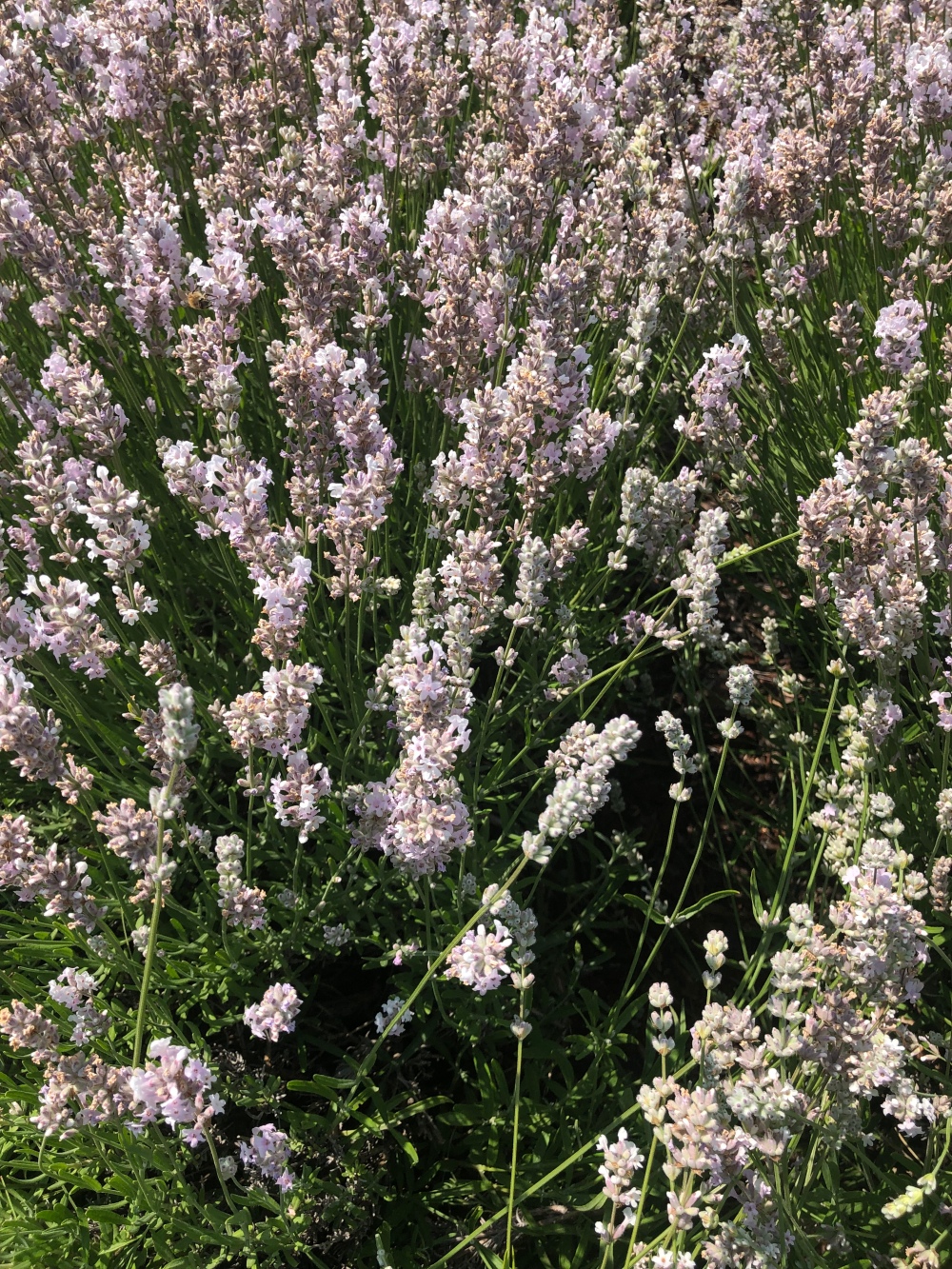 Sunday was the Gentlemen’s turn. They went off on their own adventures and I stayed at camp and tried to work on fixing a ceiling panel that had previously been damaged by a leak in the roof.

Monday we drove up Mount Hood to Timberline Lodge, which was used for the exterior shots for the movie The Shining. It was built in the 1930s by the WPA. Lots of history and incredible craftmanship. And people were skiing up there in July! 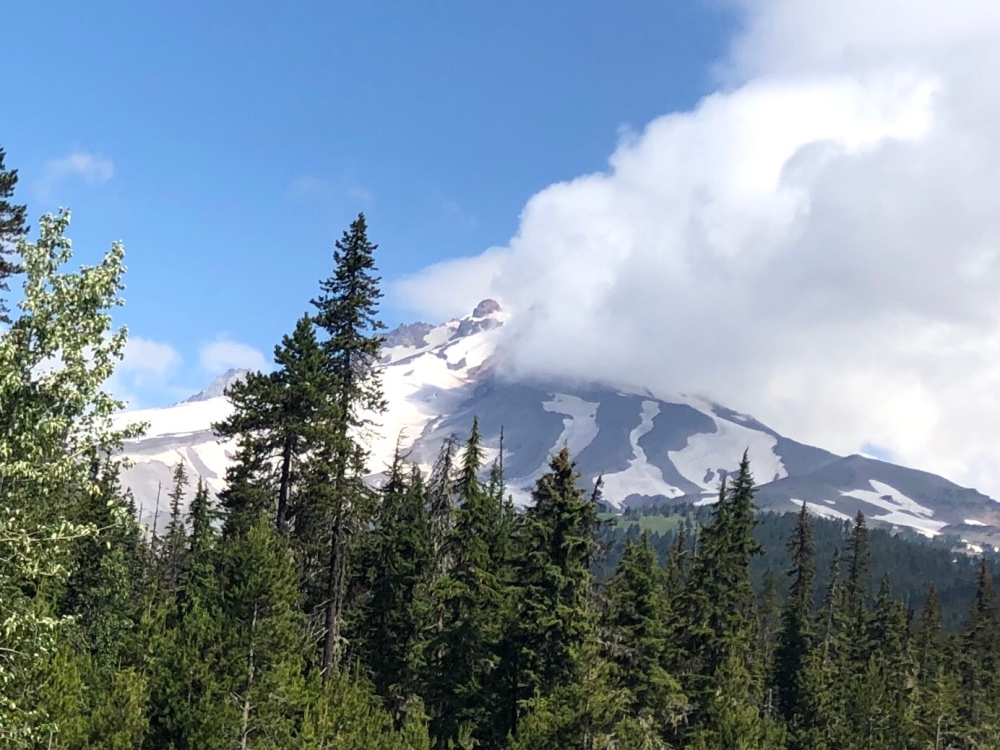 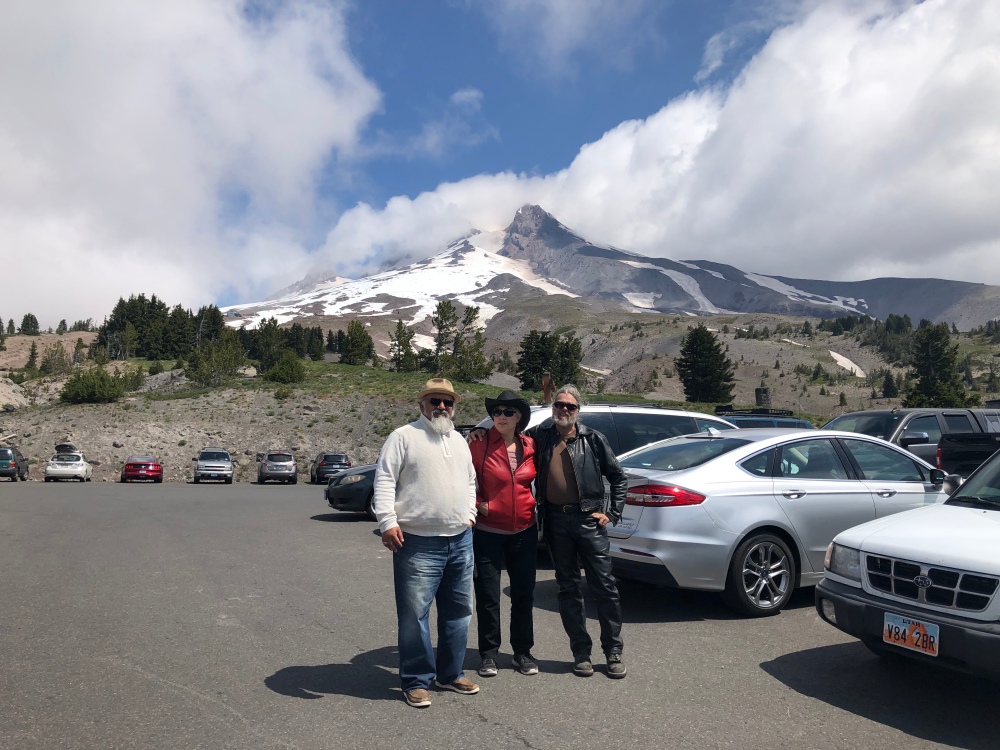 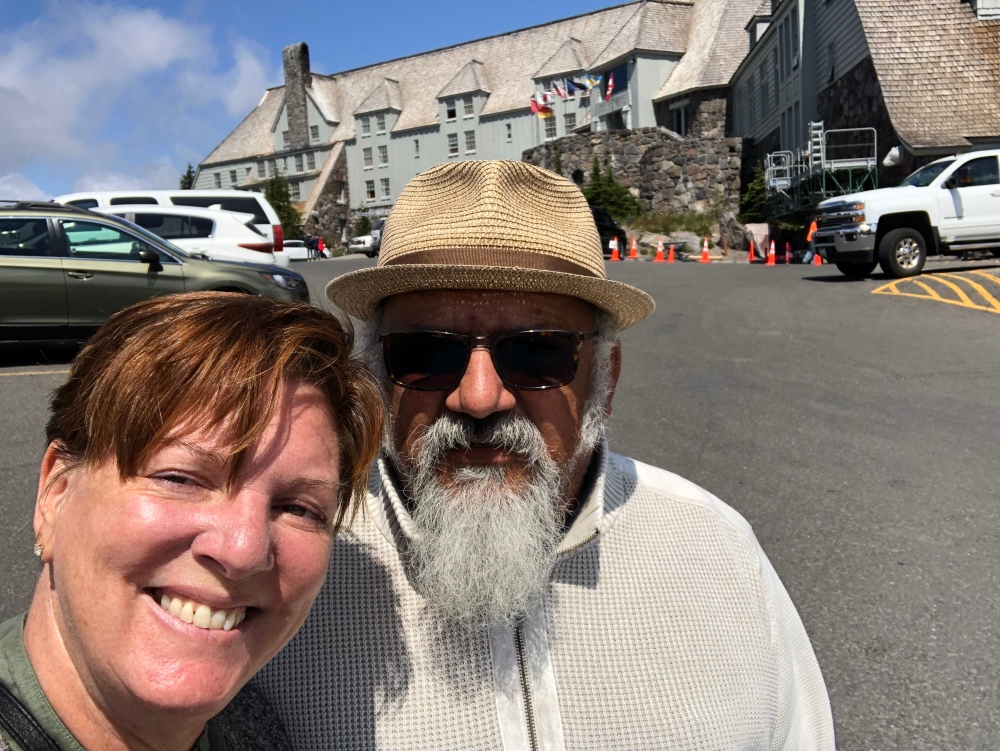 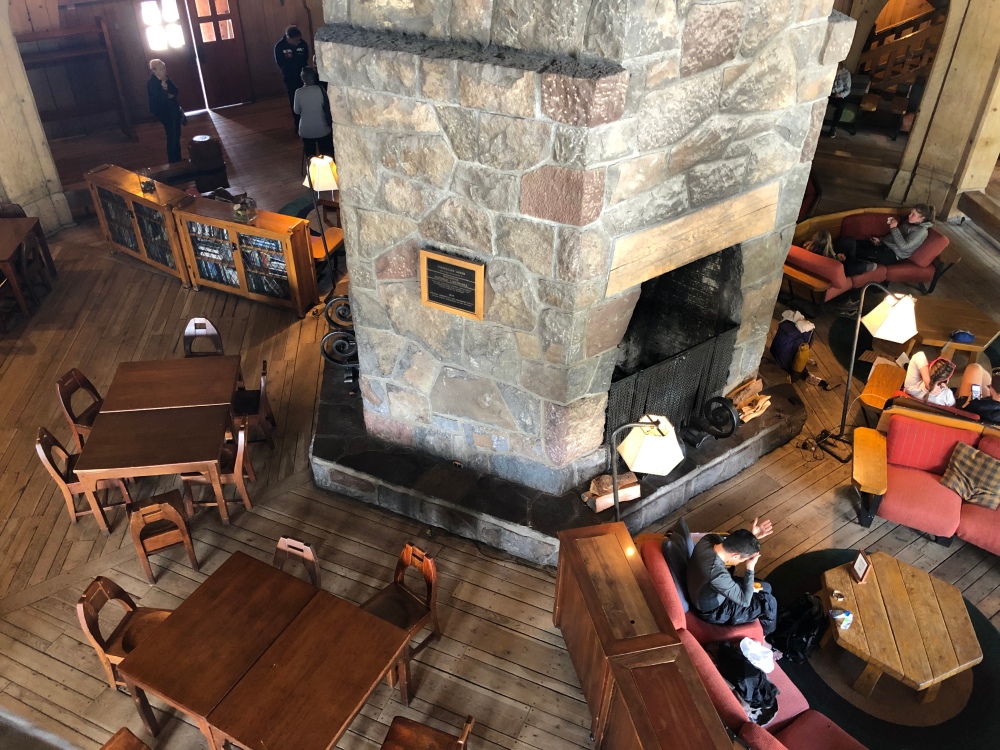 Tuesday was the official end of the Rally. Lots of hugs and goodbyes. I got pictures and contact info for everyone, and we watched and waved as each one drove off. At the end of the day there were only four coaches left. We all planned to leave on Wednesday.

Wednesday morning, Shahin was in town getting our safety cables from the mechanic who installed our baseplate on our car for towing. By the time he got back everyone had left and it was just us! We finally packed up and left around noon, stopping again at the mechanic to fix a wiring issue, and headed to Viento State Park.