We thought we would get an early start Sunday morning. We woke up early, and I took Dashi out for a nice walk around the neighborhood. The night before, we had looked up the time of sunrise in Mobile so I was expecting to start seeing light between 6:30 and 7, but at 6:45 it was still pitch dark. I googled the local time and found out that it was indeed only 5:45. And I thought iPhones automatically knew what time it was wherever you were!

It was pretty easy to spend an hour puttering around our sweet new home. We got it all prepared to leave before we went to get breakfast in the golf club.

After breakfast we hit Walmart to see if we could get the part for the reverse osmosis, cup holders, and a lumbar support pillow for Shahin, but that trip was mostly a bust. He did get a lumbar pillow, some Wd-40, and a Chromecast so we could watch Netflix on our tv.

We finally were on the road around 9:30, not exactly as early as we wanted. 150 miles down the road, Shahin noticed that the engine did not seem to be getting enough power.

We pulled off the highway to a truck stop and after a few phone calls, we had a guy on the way over to help us. Amazing! It was all thanks to the Wanderlodge owners group (WOG) that Shahin joined as soon as he decided that that was the RV for us. He called Randy, the head guy over at the WOG, who helped broker the deal on our Bird. Randy listened to Shahin describe what was going on and asked him what one of the gauges was reading. When he heard the answer, he said, “you have a bad fuel filter.” Then he said he knew a guy near where we were and a few minutes later Steve Gureasko called and said he lives five minutes away(!) from where we were and he’d be right over! What?! Who does that? Steve said that Wanderlodge owners do, that’s who! “That’s what we do!”

A few minutes later He was there. He helped Shahin change the filter, and took a spin with us teaching us so much more that we didn’t know about the operation of the rig. I did hear a strange kind of thumping sound, but Steve said it was our tires and didn’t seem to think it was any big deal.

He was SUCH a nice guy. We told him we were planning on going to San Antonio that night and he seemed skeptical that we would get that far. He gave us the name of a campground that he liked that was a couple hours before San Antonio if we decided to stop earlier. He also told us about a Wanderlodge rally in Georgia in October. So now we’re planning on going to that. And he kept checking on us throughout the day by phone. Did I say what a nice guy he was?

By the time we got back on the road it was 2pm and it was still 500 miles to San Antonio. It didn’t take us long to figure out that we would never make it at a reasonable hour. So we called the campground Steve had recommended. Karen at Schulenburg RV Campground was also super nice and knew who Steve was.

About that time, we started hitting a traffic jam. And for the next hour or so we were only going 5-10 mph. We did turn on the CB radio to see if anyone would say what was going on. Turns out there was a minor fender bender that was already off to the side of the road. No idea why people slowed down that much for such a small thing! Somebody did say, “Nice Wanderlodge!” Over the CB though, which was pretty cool.

A little while later traffic slowed down again and that’s pretty much how the rest of our afternoon went. By 7pm we weren’t even to Houston. 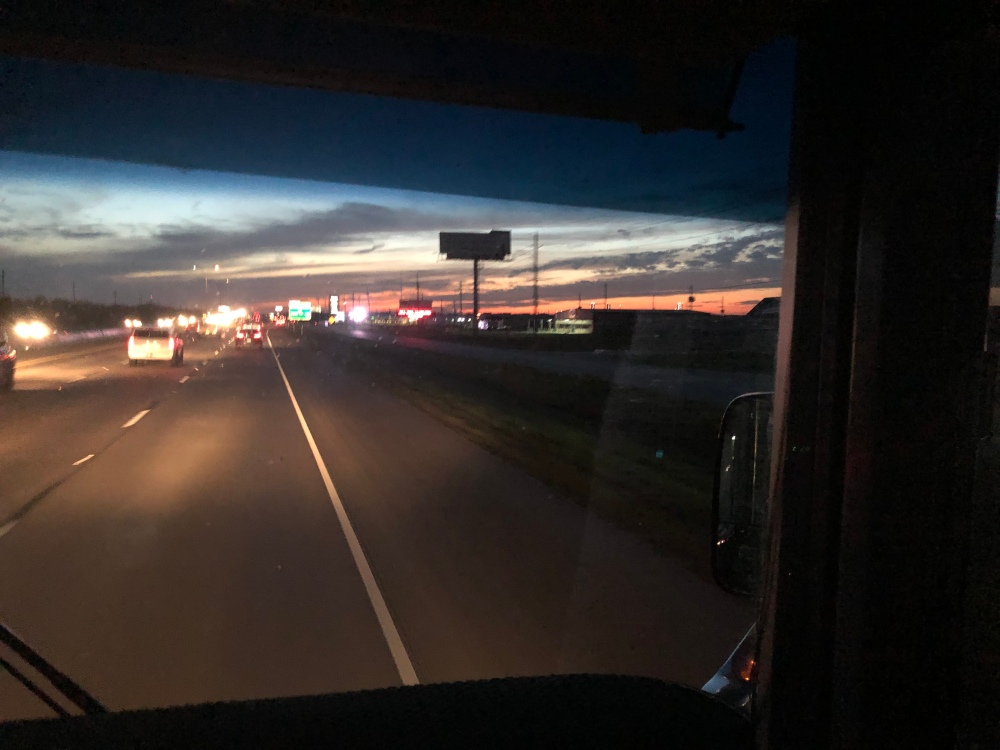 I called Karen back and told her we wouldn’t be able to make it that far, found a different RV park just east of Houston, and rolled into Pine Lakes RV Resort around 8 o’clock. It was a far cry from the nice surroundings we had the past two nights, really nothing more than a parking lot with hookups, but it didn’t matter. We were only staying the night.